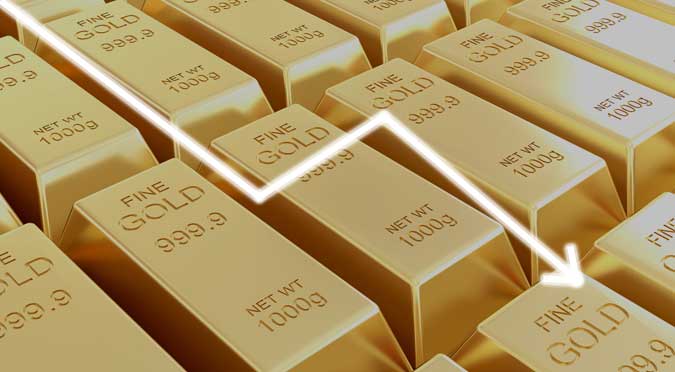 Gold is the latest defensive market to fall into a downtrend.

After being above its long-term trend for most of the year, gold has closed below its 200- day average. The last time it did so after a long time trading at above-average prices, it ushered in a protracted bear market. It has also lost value for the 8th straight trading day, one day shy of an all-time record dating back 40 years.

Last week has seen the end to a number of streaks. It seems investors have suddenly discovered the possibility of better growth ahead, at least judging by the jump in economically-sensitive sectors, a rally in interest rates and the U.S. dollar, and a pummeling of formerly defensive groups like utilities and gold.

The last two (utilities and gold) have just dropped below their long-term averages for the first time in at least six months. The spot price just fell below its 200-day average for the first time since February, losing value for the 8th straight session, nearly a record dating back 40 years. The tables below show gold’s performance going forward when it lost its 200-day average for the first time in six months, and when it has lost value for 8 straight days.

When gold fell below its 200-day, its future returns were mixed. Several times, it led to protracted bear markets, and several times it did not. Even including the worst scenarios. though, over the next 3 and 6 months, the risk/reward was firmly positive. Gold’s rally at its best point was more than three times greater than its loss at its worst point, on average. That’s nice in theory, bu those two losses of more than 17% over the next three months would have been tough to stomach.

After gold lost 8 days in a row, it rallied over the next two weeks 6 out of 8 times, but that evened out by a month later. After those shorter-term gyrations, it tended to rally, sporting a positive return every time after three months and with an impressive risk/reward skew to the upside.

Something of interest to note: investors rushed into the gold miners stocks even on a big down day, which tends to lead to negative returns going forward. That’s not the kind of behavior we usually see at exhaustive bottoms.

During positive trends, the Optimism Index on gold tends to remain above 50, with 40 being “maximum” pessimistic. It has declined from 70 to 51 in the past couple of weeks, and another week or two of selling should push it down to that lower 40 area. It would be logical to think that if the new downtrends in utilities and gold are due to better economic growth (that’s the theory, anyway), then it should be good for stocks.

Looking at the dates in the table below, the S&P 500’s best performance was three months later, when it showed a positive return 17 out of the 21 times, averaging 2.8%. That was good, but not significantly above random. It’s risk/reward ratio was barely positive

After the dates in the previous table about gold losing its 200-day average, the S&P again was the most positive over the next three months. It was higher 6 of the 8 times, averaging 3.1%. The risk/reward was positively skewed (-1.7% versus +8.2%), but there was a huge loss from 2008 in there, which always tends to dampen the enthusiasm.

The summary stats below show the S&P’s returns following all the dates since 1950 when either utilities or gold fell below their respective 200-day averages for the first time in months. We can see that shorter-term returns were “meh” but by three months later, stocks had a strong tendency to be higher, though the average return was barely higher than random and the risk/reward wasn’t especially positive